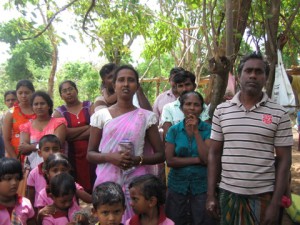 The drought stricken village of Samagipura lies in the Tanamawila area of Sri Lanka and before the agreement of Project Sri Lanka in 2015 to provide an agro-drinking well, the local families went for many months of the year without water to hand. They had to walk some two kilometres to the river to fetch water for their needs.

On land owned by Mr Sumanadasa, a ground water spring provided water for very short periods of the year, yet the hole did not retain water. Mr Sumandasa generously agreed to allow access to this land for the construction of a well and for future use by all local families.

The well at Samagipura is a large one, measuring 30 feet in depth and 22 feet in diameter.

As a result of its construction, the families can now grow crops for their own consumption and for sale including coconuts, bananas, chillies, papayas and cashew nuts.

The people of the village had no hesitation in offering their labour to support the hired skilled labour needed to construct the well. A team of villagers accepted responsibility for over-seeing the construction task, making this a genuine locally-based partnership model. All people in Samagipura are now able to derive considerable personal and economic benefit from the well.