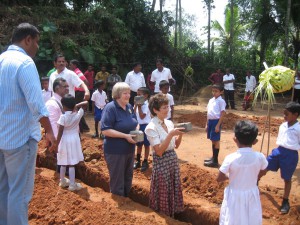 On 1st February 2014 a ceremony was held at the site of the construction of the new primary school which is to be built near Mapalagama, inland from the town of Galle. The new building is to be funded by Rotary District 1030 in the UK and Project Sri Lanka as a joint venture (see the Mapalagama village page of this website.)

The ceremony was attended by the President of the Rotary club of Alnwick, Elaine Smith and her husband Rotarian Graham Smith and Charity Trustees David and Joy Cooper and Michael and Alison Brown. They were warmly welcomed by Rotarians from the Rotary club of Colombo Mid City, the school Principal and staff, together with parents and children from the community. It is hoped that the school will be constructed by July 2014 alongside refurbishment of an older classroom block on the site.