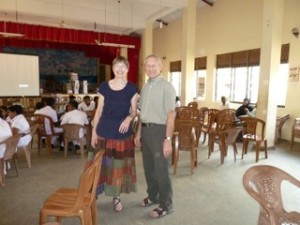 Between January 15th and January 23rd, 2012, Michael and Alison Brown were guests at Sabaragamua University, high in the hill country towards Ella.

We were invited to participate in “English Week”, and were made very welcome by the Vice Chancellor, and by both the Department of English Language Teaching and the Department of English. A schedule had been devised which included some teaching at schools in Balangoda and a visit to the Military Academy at Diyathalawa, as well as work at the University itself.

As usual we were impressed by the friendliness and enthusiasm of pupils, students and staff. Highlights included our “entertaining” more than 120 youngsters for a four hour session, engaging with non academic staff, and talking to students about cultural differences. Most of the people we met and taught had some knowledge of written English – the challenge (as emphasised by our wonderful coordinators from DELT) was to encourage them to practice their English speaking and not to be afraid of making mistakes.

Our very enjoyable and stimulating week ended on a high note. On Sunday afternoon, we were entertained at a variety concert given by the external students. There was drama, music, comedy, choral singing, and dance (both traditional and modern). The standard was extremely high, and there were moments of slapstick which brought tears to the eye.

Now back home (after visiting Yala National Park, and then relaxing at Jagabay Hotel on the south coast), Alison and I have many treasured memories of our week at Sabaragamuwa. We definitely gained a lot from it, and we hope that our hosts also found it a valuable experience.