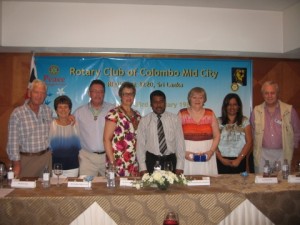 Four Rotarians from the Rotary Club of Alnwick in Northumberland spent two weeks in Sri Lanka in January 2013. The visitors were Assistant District Governor Terry Long, Club President Marion Long, Vice-President Elaine Smith and Rotarian Graham Smith. The team stayed with hosts from the Rotary Club of Colombo Mid City and attended Rotary meetings at the Colombo Mid City Club, Colombo North Club and Colombo West Club. After their stay in Colombo they set out on field visits to observe a number of the Charity’s projects which are associated with Rotary Sri Lanka. They saw the school at Moraketiara which Alnwick Rotary Club had contributed to and a number of other village projects provided through Project Sri Lanka. It is anticipated that this visit will lead to the development of future joint projects linking Alnwick and Rotary Sri Lanka with Project Sri Lanka.